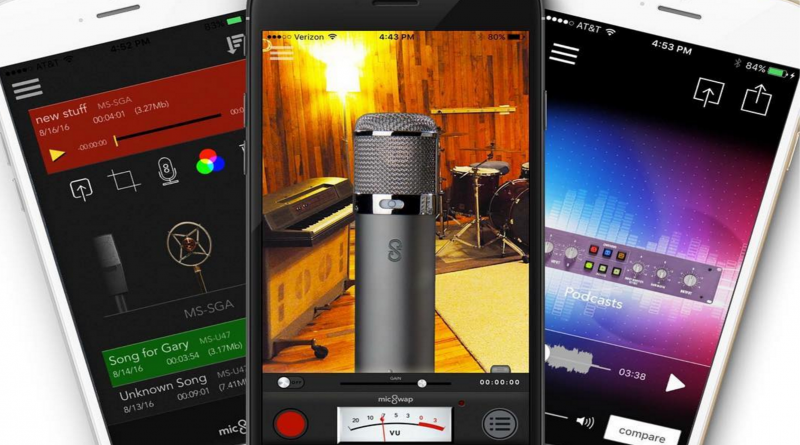 Buying a new microphone and haven’t decided which one to get? Or have you ever missed out on a great audition because you were not in your studio?

MicSwap by Future Moments may just be the solution you need.

MicSwap is the brain child by Gary Levitt of Future Moments, along with programmer Wim de Nood. Dubbed by Forbes as the “Instagram for your voice”, MicSwap transforms your iOS device into a studio, mic emulator and recorder.

Creative Director and Co-Founder Gary Levitt explains, “MicSwap is an intuitive recording app that simulates a real recording studio environment. Record with 13 of the best studio microphones around. It’s a microphone locker and recording studio in your pocket. Each mic has its own sound and you can choose between 13 (more coming) professional microphone emulations. You can also record and filter new or pre-existing audio.”

Levitt previously played in bands and toured internationally, and also ran a recording studio before launching MicSwap and other audio and video related apps – AudioMaster: For Podcasts And Music and AudioFix: For Videos. They saw a niche in the expanding mobile music industry, and Levitt wanted to create something that he too can use being a musician himself.

“Each microphone has its own sound, so in using the app you can get a sound that works best for what you’re putting into it. This is especially helpful for voiceover artists to record mobile on the go. MicSwap also has a gain knob so you can be sure you’re getting a good level in your recording. You can also use one of our other apps AudioMaster to sweeten the mix and boost the volume. In MicSwap you can also change the sound after your record so you ensure you get the best tone before exporting and sharing.”

MicSwap is currently available only in iOS devices and it comes in limited version with in-app purchases if needed. Levitt adds, “If you want to be a professional user you really should own MicSwap Pro, because that gives the ability to use the app with an external microphone or interface for high fidelity quality recording. Voiceover artists can inexpensively get a professional sound anywhere they go with just their mobile device and microphone.”

MicSwap is rated 9.9 in AppCrawlr and featured in TechCrunch, Forbes, MacLife and other music and app sites.

“If you’re yearning to broaden your sonic palette but don’t happen to have a spare $2K to spend, you’ll like MicSwap Pro a whole lot.” – MacLife

“MicSwap Turns Your iPhone Into Rock And Roll” – TechCrunch

Future Moments is looking to expand MicSwap in the future, “Besides adding to our other apps AudioMaster: For Podcasts And Music and AudioFix: For Videos, we’ve got more mics coming to MicSwap shortly as well as the ability to overdub.” They are also currently working on an Android version.

Do you have MicSwap on your phone? Let us know what you think.