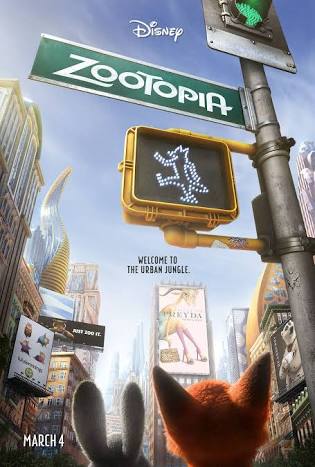 After the much-applauded first trailer of Disney’s latest animation project Zootopia, we are now treated with the full voice over cast announcement.

When the first teaser was released, the lead roles were already cast with Jason Bateman playing the role of Nick Wilde, the con-artist fox and opposite Bateman is Jennifer Goodwin who provides the voice of the by-the-book rabbit Lt. Judy Hopps. Joining them are Shakira, as Zootopia’s biggest pop star Gazelle and Disney favourites Katie Lowes (who was in both Frozen and Big Hero 6) and Alan Tudyk, who will also be voicing in another much awaited Disney movie Moana. It was now revealed that Lowes lends her voice to Dr. Madge Honey Badger who is the heads the City Hall’s medical cases. Tudyk on the other hand plays the crook Duke Weaselton.

To complete the cast are:
• English actor and now another Disney favourite, Idris Elba is the voice of Chief Bogo, a tough buffalo and head of Zootopia’s Police Department.

• J.K. Simmons from Whiplash, Law & Order, and The Closer will play Mayor Leodore Lionheart, who is leader of Zootopia and who coined the city’s mantra, “In Zootopia, anyone can be anything.”

• Nate Torrence is the charming Officer Benjamin Clawhauser. Torrence is known for his role in the HBO series, Hello Ladies.

• Jenny Slate plays the sheep Assistant Mayor Bellwether. She was previously seen in Saturday Night Live for a season, and known for appearances in House of Lies and Parks and Recreation.

• Comedian Tommy Chong from Up in Smoke and That ’70s Show lends his voice as Yax the Yak, the most enlightened, laid-back bovine in Zootopia.

• Oscar winner Octavia Spencer from the movie The Help is Mrs. Otterton, desperate otter who turns to Officer Judy Hopps for help in solving her husband’s mysterious disappearance.

• Actress and voice artist Bonnie Hunt from the movies like Jumanji and Jerry Maguire, lends her voice of the mother of Judy, Bonnie Hopps.

• Raymond S. Persi, director for episodes in The Simpsons and also voice actor in Wreck-it-Ralph, is Flash – the fastest sloth working at Zootopia’s DMV (Department of Mammal Vehicles).

• Don Lake is Stu Hopps, a carrot farmer and father to Judy. Lake is known as Bonnie Hunt’s producer and collaborative partner in the Bonnie Hunt Show.

• Jesse Corti of Frozen and Beauty and the Beast is the voice of the jaguar Manchas, a highly regarded chauffeur the city’s biggest and shadiest limo company.

• Lastly, we have John DiMaggio from the Futurama, Adventure Time and The Penguins of Madagascar, voice Jerry Jumbeaux Jr. The character is the owner of Jumbeaux’s Café, an ice cream parlor for elephants.

In their voice cast reveal, Director Byron Howard said, “We had so much fun casting this film.” He added, “Zootopia features such a large and diverse range of characters – one of our biggest casts ever for a Disney Animation film. We needed talented actors who could help bring these animals to life.”

Director Rich Moore further adds, “Everyone in this incredible cast is bringing something special, something unexpected to their characters, which really takes our story to a whole new level.”

The Walt Disney Animation Studios’ Zootopia is out on theatres come 4th of March, 2016.