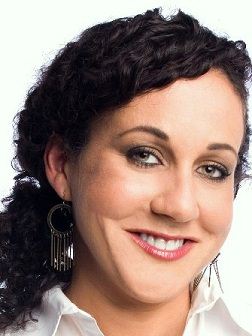 Australian female voice over artist Dani Bellamy has never had a traditional voice over agent, but is now one of Australia’s top voice over artists online. She records from her professional studio in Sydney Australia serving international clients. Dani is a proud voice talent at The Voice Realm and we are so happy to have her!

I’ve been doing voiceovers full time since 2008, but voicing ads,  promos etc was always a part of my job throughout my on air career, having worked in commercial radio since 1996.

My first radio job was at a small country station where I was the only female broadcaster and I was thus called upon to voice all the ads for products aimed at ‘the ladies’.  I suppose I quickly learned the craft there as I continued to be called on for voiceovers at all the stations I worked for, including in Sydney and Brisbane.

When I began to fantasize about life as a full time voiceover, I realised it was time to cut the radio apron strings and enter the brave new world of freelancing.

Oh, becoming a freelance voiceover is only the best decision I ever made.
I love the complete control I now have over my life.  If I work on a weekend, it’s my choice to do so.  And I love that if I work hard, it’s for someone who appreciates my efforts…  me!
It’s wonderful to be able to choose the work I do and who I work with.  It’s been five years since I made the leap and I still feel extremely lucky to be ‘getting away with it’.

The Voice Realm makes the process of securing quality jobs simple and pain free.  I have never had an agent in the conventional sense of the word, nor have I needed one.  Traditionally voice talent with agency representation has tended to get the better jobs, so for those of us out there on our own, it is really good to have an organisation like The Voice Realm doing what they can to secure some of that work for us freelancers.

With many other sites, it’s totally about value for the ‘employer’ and therefore there is pressure on the freelancer to offer the absolute lowest price.  This can be disastrous for an experienced professional who has to compete with inferior and often amateur contractors on price just to get a look in.

So far the work I have received from The Voice Realm has been great.  The clients have been happy with the first take I have supplied and I see this as partly a reflection on The Voice Realm effectively managing the client’s expectations and helping them select the talent that is exactly right for their project.

Because The Voice Realm is so well structured I haven’t really needed any assistance or support.

As better technology becomes more accessible I doubt there will be much need for voice talent to physically be in any particular studio when their home studio sounds so good.  Plus a good voice talent usually doesn’t need any face to face direction.  A few lines above a script will usually suffice.  With that in mind, hiring through something like The Voice Realm is the way of the future.
I am always puzzled when I hear an ad on the radio now where the voiceover is putting on an accent that is clearly not naturally theirs.  I wonder why, when it’s so simple and cost-effective to hire the real thing (ie an artist with the accent they want), they don’t.  An Aussie can spot a fake accent a mile off, so hire a real native Australian voice!

Hire Dani when you next require an authentic Australian female voice.