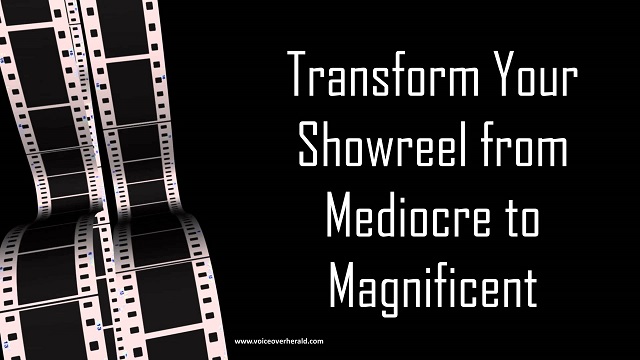 What makes most voice over showreels so, well so-so? Let’s face it, the bottom line is that your reel is charged with a very important task – to get you work. But often this just does not happen. I want to take a look at why this is and how you can invigorate your vocal shop window.

As a voice over coach I often get asked to review demos and, as you might expect, the range and quality vary enormously; I receive everything from highly polished works of art, to scrappy collections of poorly recorded, thrown together reads.

Despite this diversity there is often a common thread running through them: they fail to engage the listener (and yes that includes those supposedly finely crafted ‘objets d’arts’). Why is this and what can you do to improve your content?

Before we move on, I just want to be clear as to what I mean by the term ‘showreel’. I am not referring to the individual audio tracks you find uploaded to voice casting websites, such as a stand-alone commercial or a one minute audiobook sample. Instead I mean the montage reels where we hear lots of different deliveries covering various genres, spliced together and without any breaks.

Time waits for no voice

One of the biggest issues is length. Too many showreels are overly long; two or three minutes is common; on one occasion I was asked to review nearly ten minutes worth of stuff! Bear in mind clients have extremely short attention spans and make up their minds in the first few seconds; if they like what they hear they may plough on to the end, but you can’t assume this will be the case.

Keep your voice-reel to 90 seconds or less.

The next frequently made mistake is reading everything the same way. When it comes to diversity, there are two basic elements we need to concern ourselves with: tone and pace.

Tone is the style and flavour of a piece; it creates colour and atmosphere, whilst pace is the speed at which you deliver the lines.

Common sense tells us that a hard sell commercial cannot be delivered the same way as a piece of gentle narration and yet some voice actors insist on the same pace and timbre for both. Or they just repeat styles over and over again – a medium paced performance, followed by a medium paced piece, followed by…. you get the idea.

Show what you can do. Life is lived in vivid technicolour, not wishy-washy hues. There may be fifty shades of grey, but on a voice over showreel we want richness and contrasts so pick ‘n mix your delivery styles. This also applies if you are doing a character reel; too often the same speed (usually slow) is applied to every vocal persona, creating little more than a dirge for the poor listener to endure. It is not enough just to use different accents – tempo is also a major consideration. Don’t get me wrong, it is totally acceptable to do something in a leisurely style, but counterbalance this with a perky, upbeat, faster read.

I remember reading an interview with Benny and Bjorn from Abba, who said the secret to writing a hit single is having a captivating intro. Those first few bars need to draw in the listener and make them want to sit up and pay attention to the rest of the song. If you meander in with a weak beginning, the momentum is lost and people are unlikely to stay for the chorus, no matter how strong that is.

It is exactly the same with your voiceover showreel – start with your strongest material. Is there a piece you are really proud of? Then make this your opener. If you haven’t got a recording that seduces, then you need to create one.

As a general rule, quicker reads often work better at the front end, but if you have a slower read that dazzles and enthralls, then use this instead.

Pardon? I didn’t quite catch that

You have probably noticed I haven’t yet mentioned much about recording quality  – apart from my gentle sideswipe at ‘perfect’ demos near the beginning of this article. Of course high audio standards are important, especially as many clients will be judging the sound you can achieve from home to see if it comes up to scratch.

Although you should not get too techie about the whole thing, it is worth bearing the following in mind:

In voice overs, certificates or diplomas are pretty pointless. Instead we have something far more tangible – the showreel. It is your chance to make a positive first impression, so stand out from the crowd with a compelling reel that beguiles and entertains; leave the listener in no doubt that you are the voice they have been looking for.