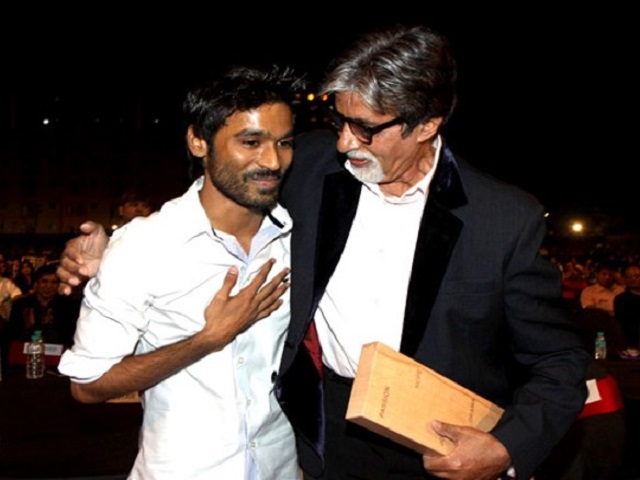 You know how to show pain, joy and anger. Raw emotions seen in every quiver of the lip, every tear that leaves your eye, but you are silent – no voice to echo your emotions. This is the story of Shamitabh.

Shamitabh, out in theatres in India, features a talented, aspiring mute actor who finds his “voice” in the person of an old alcoholic.

Daanish (Dhanush) was born to act, and despite his inability to speak, he is passionate to be one of Bollywood’s heroes.  Aided by the ambitious, young assistant Director Akshara they rediscovered the down and out aging actor Amitabh Sinha (Bachchan). Together they became the two-halves of “Shamitabh.”  As the on-screen Shamitabh gains popularity, egos start to clash.

It is ironic that for a movie that features a mute character it lacks the silent moments that will draw the audience into to Daanish’s world. You cannot miss unabashed reverence of Director R. Balki to actor Amitabh Bachchan who is known as one of the greatest and most influential actors in Indian cinema.  Though the film gives the viewers an elaborate backstory of Daanish, the movie devoted much of its time to Bachchan’s character and long soliloquies – to a point that you may forget that there is another half in the name of Shamitabh.

Despite the indulgence and undisguised tribute to Bachchan’s powerful voice, the film still puts across the message that disability is not something to be apologetic about.  A lesson in self-awareness, rejection, and acceptance of both success and failure.

Shamitabh shows us an interesting take on “lending” voices and equal recognition for the ironically “silent”, faceless voice actors.  This is particularly a touchy subject in a country where the speaking voice, singing voice and the on-screen actor can be three different persons portraying the same role. R. Balki somehow puts the limelight on the “voice artiste” who for so many decades been crying out for more recognition as they bring voice (and maybe more fame) to actors across the many Woods (Bollywood, Tollywood, Chhollywood, Mollywood, Kollywood, etc.) of India.