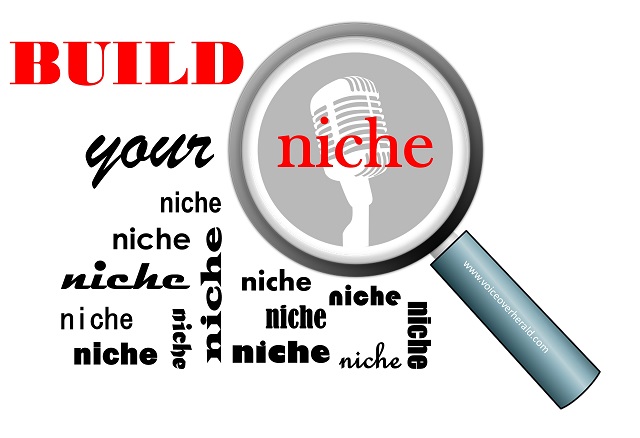 The business of voice is such a wide sea of opportunity that some cast their net anywhere hoping to get a good yield every time. But casting your net anywhere and everywhere, and using the same technique or style over and over may not give you the results or satisfaction you want or need.

A business, especially a small one, cannot be all things to people.  In the voiceover industry, like in any other business, the narrower you define your target market, the better.  This is known as creating a niche and is key to building a successful business and career.

According to Lynda Falkenstein, author of Nichecraft: Using Your Specialness to Focus Your Business, Corner Your Market and Make Customers Seek You Out, “Many people talk about ‘finding’ a niche as if it were something under a rock or at the end of the rainbow, ready-made. That’s nonsense!” People often make a mistake that doing many things and being good at it will be their claim to success. But as they say – Jack of all trades, master of none. Falkenstein also said that rather than creating a niche, players make the mistake of falling into “all over the map” trap.  She warns, “Smaller is bigger in business, and smaller is not all over the map; it’s highly focused.”

One voiceover artist who knows where to carve her niche is Marcia D. Bennett.  She discovered early on as a child her innate talent as a voiceover.

I remember, as young as 9 years old I was unconsciously honing my skills.  This was because my younger brother, who was unable to read well, asked me to audio record the famously popular “Archie” comic books onto cassettes so that he could follow along – kind of like an audiobook scenario.  I very much enjoyed recording these comics, as it allowed me to modulate my voice to suit the different characters within each story, and to, of course, help my brother to learn how to read.  As time went by, my brother had a “library” of recorded audio cassettes to go along with each of his “Archie” comic books from his vast collection.

I was definitely the kid who was always making up different voices through voicing my brother’s comic books, but I continue to hone my skills as I grew up.

I remember in my Grade 12 English Class we had to do a biography of a famous personality.  I chose the late great Marvin Gaye.  I wanted to format my biography as an “interview”, but how would I have the voice of Mr. Gaye in my interview when he was deceased… so, I used my creative juices and thought “What if I had a conversation with his ghost with myself doing his voice”?

So, that’s what I did!  I timed the interview so that the voice I had for Mr. Gaye answering would be recorded on audio cassette and I would be the journalist asking him questions LIVE.  For Mr. Gaye’s voice, I had to deepen my own voice considerably to sound like a male.  No one knew the wiser that it was me voicing Marvin Gaye and when anyone asked me who did that part, I just told them it was my brother.  By the way, I got an “A” on that assignment!

Marcia has been told to have a “dynamic range.” She can set her voice in a low tone and a high tone; she can do both male and female characters.  She can be bratty toddler, nerdy tween to a valley girl teen or maybe a wicked witch, game show host, or a middle-aged southern woman.  She can also put on a serious female adult narrator voice that she uses on e-learning modules. But what she describes as her best work are projects that are targeted towards children.  She recognised that as her voice is naturally higher sounding, voicing child characters will be more natural and easier for her. Also as a voiceover actor she felt most comfortable when working in animation.

Elley-Ray, she is a brilliant actor, VO artist, coach, and director. One of best in helping one develop “character” voices.  She has taught me that voice acting is “about truth…it’s about realizing and making realistic copy”.  So, to do that as a voice actor, we must inspire our audience by bringing “love, joy, and risk” to words which will, in turn, evoke “feeling” within our listeners.

Working in animation allows me the freedom to express my emotions through that one particular character.  If I am able to evoke the emotion of firstly joy, laughter, sadness, or anger within my audience, then I feel that my mission has been accomplished.  I believe that animation is the best platform to do that.

Marcia knew that concentrating on what she loves and do best can make her stand out and succeed in this industry.

For a woman who specializes in kids’ voices, I think I am on level ground with the males. This is because, a lot of the time, women VO artists portray the child male characters in animation or video games, so for me in particular, the playing field is more evened out.

Also in order to set myself apart from the rest, I got to engage in ongoing learning/training and effective self-promotion.  This includes smartly branding myself and making myself appealing to a certain target market. I have been blessed to able to create a niche in voicing “children characters”.

It will take dedication and persistence to keep on the VO journey which can be sometimes challenging.  However, if it is in your heart to do VO, then so be it, but you must be willing and able to put in the work to attain a level of success in this competitive industry. This means going through on-going training/coaching to develop and hone your craft; investing money for training/website/subscriptions/applicable VO equipment; and networking with your voiceover peers to share knowledge and to support one another.

You may feel at times that you want to give up, but I urge you don’t because it’s at that very time that you may want to stop, that an opportunity is awaiting you.  Auditions will be many and jobs may be sparse, but as you become more experienced, and learn to focus on what you do best, the frequency of jobs that you book will increase, I promise. Affirm daily that you are the best at what you do and it shall be!