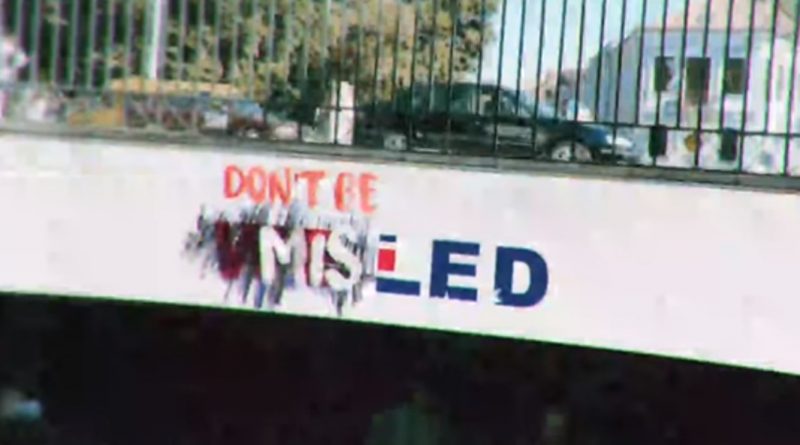 A U.S lobby group is getting a lot of attention, but not for the reasons they were hoping for.

Property Rights Alliance, is an advocacy organization whose efforts are to safeguard physical and intellectual property rights, both in the U.S. and in international stage. Their recent campaign was a volley of attack ads against Australia’s plain packaging laws which requires the removal of all branding (colors, imagery, corporate logos and trademarks) from tobacco products.

In their latest video posted on YouTube, the lobby group has labeled this Australian law as “radical experiment to restrict consumer choice and destroy intellectual property.” As expected this ad drew massive flak from not just Australians but from people across the globe, but not for the reason you might expect.

Plain Packaging. Know the Real Facts. video opened with a very prophetic line… “In life, not everything you hear is always true.”

And then suddenly their message was lost in translation…

The voice over, which seems to be doing a poor attempt at an Australian accent, accuses the “Aulstrayan” government of comparing “ahhrples to oor’ngas”. It also claims that youth smoking rates increased following the introduction of ‘ploin pickagings’.

The group’s strategy to debunk the Australian plain packaging data went haywire as viewers were more interested to know, “What’s the deal with that accent!?”

In an interview with The Age, Fiona Nash, the federal minister overseeing tobacco policy, said, “The terrible pretend Australian accent in this American ad has the same amount of credibility as the ad itself: NONE.”

Netizens of course could not help but to chime in.

“How hard is it to find an Australian expat in the U.S. and pay them to narrate?”

“It boggles the mind how they could release something with such a bad Australian accent. They clearly are not very bright.”

“Who’s responsible for hiring the American to do the accent?

“Practice your accent. It is as fake as your facts.”

“’Facts’ just as fake as the accent. I’m a Yank and that sounded bad even to my ears.”

“Did Crocodile Dundee have a stroke?”

“This group may have spent thousands on the video and graphics, however it is clear that they have skimped on the voice over, more likely paid an American $20 or $30 to do the read,” says Lauren Maree, marketing executive of The Voice Realm Australia.

She further adds, “Had they have used a professional for around $200 for this project they would have saved face and probably have a very slick looking video and got the message across. People can then focus on discussing the issue, refute or back-up their claims; but because they used this poor alternative, their campaign has completely fallen apart and mocked in mainstream media.”

Lauren continues, “The saying, ‘It’s not just what you say, it’s also how you say it,’ definitely rings true in advertising or in any campaign. You can say the most laughable thing, but if read or voiced properly it can still merit some attention. Content, imagery and voice go hand in hand in creating a great and effective campaign.”

“Even with their unreliable ‘facts’, it could still have elicited a serious discussion on the plain tobacco packaging law and its effectiveness, however because of the lobby group’s poor attempt to gain some credibility by using an “Australian” voice over, it has turned this ad into a mockery.”

“Notice how the accent slips between “Aussie” to Kiwi, to Yank and then South African? All in one sentence?”

“And who’s responsible for asking him to do the accent of a South African born Kiwi after 10 years in Ireland?

Kim Blair, an Australian voice over talent who has done numerous campaigns and commercials in both radio and television says it is important to use a voice that is a native accent so as to give the campaign the authenticity it deserves. He shares, “As a voice actor, I want the audience to believe in what I am saying… whether that is a product I am selling or a character I am portraying. The subtle nuances of an accent can be hard to pick up, so using someone that already has that, is beneficial for both the client and the audience!”

A great campaign should show a refine understanding of the audience and shows off the company’s or organization’s credibility. However, it conveys lack of interest to the target listeners and deplorable judgement when you start to feed your audience misleading content and poorly executed voice over – it can be undoing of a campaign, and YES even an organization.

Sadly for this organization, they may never be taken seriously after this – they can straighten their facts, but the voice over can never be ‘unheard’.

How can a bad voice over ruin an ad or a campaign? Why is it important to hire the right voice over talent?