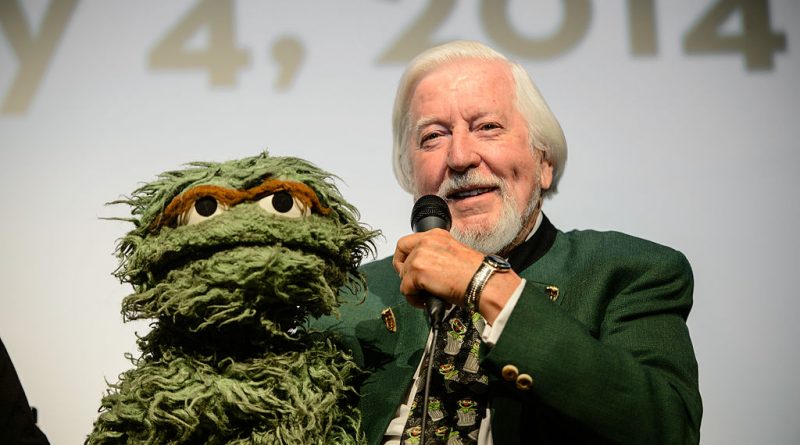 Caroll Spinney, an American artist, puppeteer, cartoonist and author who spans his career for more than 60 years. A face you may not recognize immediately, however if you grew up watching Sesame Street, he is known and loved by us all as the voice of Big Bird and Oscar the Grouch.

He first came across Jim Henson at a puppeteering festival in 1962, where he didn’t realise Henson was already offering a job when Henson mentioned about “Muppets.” Spinney was already an established puppeteer having worked in Rascal Rabbits; The Judy and Goggle Show, alongside Judy Valentine, and he as the puppeteer for Goggle; and at Bozo’s Big Top, where he played various characters.

He met again with Henson in 1969 at the Puppeteers of America and finally signed up to join Henson’s team of Muppeteers. Spinney joines Sesame Street in its first season the same year and performed the characters Big Bird and Oscar the Grouch.

As Big Bird, Spinney was a six-year old, eight-foot two-inch tall bright yellow canary, known for its inquisitiveness, and friendliness.

The six-time Emmy winner and two-time Grammy winner also played another persona, very much different from the wide-eyed and friendly yellow bird – Oscar the Grouch. The green trash monster is known for his misanthropic interaction with the rest of the characters. A character very much different to the gentle and curious Big Bird, but nonetheless loved by the man who voiced him.

He said in an interview with Today, “Oscar’s kind of cool… It’s fun to play somebody very different than one side.”

After Spinney was diagnosed with dystonia (neurological movement disorder), he had to give up puppeteering for both Big Bird and Oscar the Grouch and started training new performers to play the characters – including Matt Vogel (who is the current voice of Kermit the Frog), Rick Lyon and Eric Jacobson.

This October, Spinney officially announced his retirement from Sesame Street. And this was followed by a tweet from the official Sesame Street account sharing Spinney’s last day on the set.

It is quite fitting that his last final voice recordings will be used in the coming 50th Anniversary of Sesame Street to be shown next year in HBO and in 2020 on PBS.

In an interview with New York Times, Spinney said, “Playing Big Bird is one of the most joyous things of my life.” And as Big Bird, he don’t just get to play him – he gets to live its life.

For 50 years, Caroll Spinney played a six-year old… It’s an end of an era – Spinney is one of the last surviving Sesame Street staff who has been with the show from the very start, and with his departure he leaves his legacy not just to his apprentices, to Matt Vogel and Eric Jacobson, to the show, but most of all to everyone who grew up watching him and whose childhood are all the better because of his beloved characters.