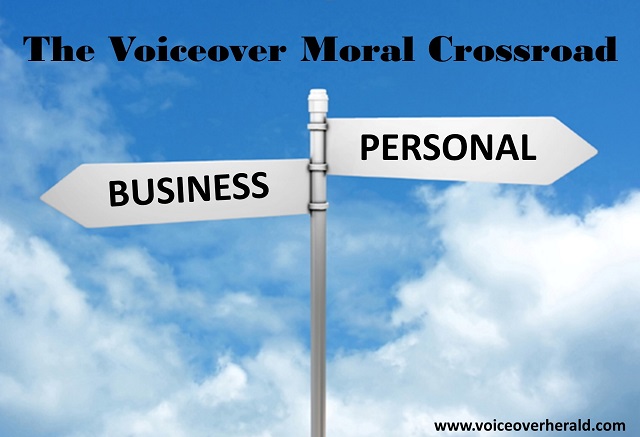 In recent news from Sydney, controversy surrounded a Paleo baby food blogger, vegan and voice over actor Charlotte Carr. Her cookbook Bubba Yum Yum: The Paleo Way for New Mums, Babies and Toddlers that she co-authored with Pete Evans was shelved after it was reportedly deemed “potentially deadly for babies” by health experts. But what caused more controversy was her sincerity in her advocacy. The wellness advocate can often be quoted on her blog site as focusing on fresh and organic produce. “No numbers, no additives. Just real food!” This is though a stark contrast to her choice of clients when it comes to her voiceover career.  Carr moonlights as the voice behind adverts for KFC, Diet Coke, Uncle Toby’s, Cadbury and Cherry Ripe.  This leads us then to the question:

Should voiceovers put aside their principles and beliefs to get that lucrative project?

There are times when voiceovers face a moral crossroad. Conflicted with a business and personal decision as to whether to take on a project that may not sit well with your principles and beliefs, from voiceover work for religion, politics, pornography, to much debated firearms, food or health choices, alcohol, tobacco, animal treatment just to name a few. Do you put aside your principles to make a business decision? It is money in the bank and may lead to future work… after all, your voice is your business. Saying no often may lead to losing not just this client but more in the future.

But this is easier said than done.

Your voice is not just your business, it is also your legacy. It is like practicing what you preach, in this case more like voicing what you practice. Would you be the voice of a product or service that you do not believe in or advocate? And if you would, how would that affect the values you hold true, your authenticity, and your credibility? Take the case of Carr – while she advocates healthy eating as her lifestyle, her voice however can be heard in fast food, soft drink and other sugar-laden product commercials, urging people to “try one today” (Cherry Ripe). It contradicts what she practices, contradicts what she preaches in her blog and book, thus stripping her the credibility as a wellness warrior.

Would you be comfortable to lose a certain amount of control? Would you allow yourself to lose a bit of your credibility?

If a close relative or a friend died of cancer from smoking, would you record a voiceover for a tobacco company if it paid $5000?  If you are a vegetarian, would you record for a steakhouse‏ that has franchise across all states? Would you lend your voice for a campaign for a politician who has made some controversial stand on gender equality with the promise of being the voice of their whole party? Or be the lead voice character for an extremely violent video game franchise?

But where do we draw the line of what is acceptable or unacceptable?  This is relative. If you are in a position that you can afford to turn down a project, do so.  If you are uncomfortable to refuse a job that may possibly make your career, say yes… you do have to make a living. Once you decide to record a project that you lose a certain amount of control, be prepared to live with that decision. And if you do refuse, be prepared to hear the talent who takes your place.

It can be a moral dilemma, a difficult and awkward decision to make, but trust your instincts because second thoughts can sometimes mean regrets in the end.

What do you think? Have you ever taken or refused a job that contradicts your principles or beliefs? Share with us your story and your view.