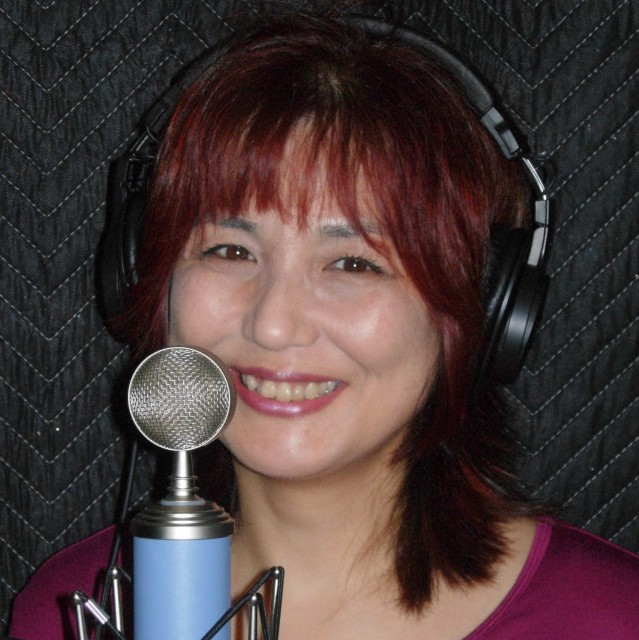 Reiko Kajiwara is based in Toronto, Canada, providing standard Japanese voice for her international clients for corporate videos, e-Learning, video games and more. But before settling in the northern region, Reiko was a professional Japanese voice actor working in the Tokyo market for over 15 years.

Reiko shares with us her life, experience working in both Japanese and North American voiceover industry, and the joy of working at home.

“I was born and raised in Tokyo. I was one of those kids who always love to sing.  I enjoy mimicking famous singers and groups, singing along to their hit songs! In 1984 I joined a local Tokyo talent agency to become an actor and I was fortunate to get my first work for a television show, then later on for commercials and corporate videos. Becoming a voice actor was sort of accidental – at that time the client demanded something different, so I was asked to do the part, and as they say, the rest was history. I just kept at it as I began to enjoy working as a voiceover, and it was fun and less stressful than being in front of a Camera!”

25 years in her career, Reiko has done work as a Japanese TV & Radio Broadcaster, Narrator & Character Voice Talent in Tokyo and Canada. She has voiced for Radio & TV Shows and Major Brand Commercials for FM Stations like FM Yokohama, TBS AM Radio, J-Wave and Inter FM.  Reiko was also a regular On Camera Announcer & Interviewer for “ICUS” the former Vancouver BC based Japanese Community TV Network.

“Here in Toronto, Canada I work locally and International from my Home Studio. I recently worked for Dance Central Spotlight, Hewlett Packard, Snack 8, Molex Connectors, F&B Revenue & Google just to name a few. I have also done Voice Directing & File Integrity Checking for other International Japanese Voice Talents for Localization Companies like 3ASound and Side UK.”

“There is a stark difference working in the Tokyo market as compared to North America. Japanese Clients are very strict, fussy and always demand multiple takes until they feel very happy about the work. The Japanese advertising companies control the business and would demand for you to talk like ‘this star or that star…’, but at the end of the day the pay was very good and you would kind of feel like a star too.  It’s a big and very rewarding Industry. A standard scenario would be in a large Studio with you on one side of the glass and on the other side there would be the advertising company’s Project Executives, Producer, Director, Product Client, AD, Engineer plus your own Agent and other people running around serving drinks, tending to everyone’s needs, etc. It was always a Big Production!”

“Here in North America the scale is much smaller. I have worked in small Studios with just an engineer and the Client on ISDN. But there is joy working from your own home studio. It’s more relaxed here, but as a talent you have more responsibility as you don’t have an entourage of people correcting and directing you.”

“In Japan, it is ULTRA competitive, considering Tokyo already has massive voiceover population and there are so many more young talents that join the market yearly.  As far as the North American market, it is convenient that I don’t have to compete with that as the bulk of my work is International and I don’t have to depend on the local scene… the joys of the Home Studio and High Speed Internet!!!”

“For some years I have been so busy raising our daughter that it was only because of my husband’s encouragement that I got back into the Industry. So I am still relatively new at rekindling my voiceover work, especially now being able to work via the Internet… it is quite exciting!”

To make sure that their home studio is equipped and working right, Reiko leaves that to her husband Brian Richy.

“We have gone through 5 Audio Interface systems and 3 computers. We now have an Apollo Twin with a Mac Mini i7 Quad Core and using a Blue “Bluebird” Studio Mic. It appears that equipment is like people… some things get along well together and some things don’t! Then again you have your living environment, acoustics, age of home etc.  Our condo is 40 years old which means the wiring codes and quality of wiring is 40 years old. Inconsistent voltage readings across the grid play weird things when you are recording and it’s impossible to get a perfect take every time.  My Husband is always pulling his hair out screaming why why why it sounded like a perfect take….but on playback there are some strange noises in the file!!!”

“So our advice to people planning to buy equipment is first analyze your surroundings and environment and test as many different packages as possible to see which is most stable and sounds clean and pristine. It is not always plug and play out of the Box!!!”

“I am just a Standard Female Japanese Voice Talent and wouldn’t call myself a Bilingual Artist since I only work in Japanese. I guess I was spoilt by my Husband since he still speaks Japanese and so I have never fully had to command English. We always speak Japanese and some English at home. My daughter speaks Japanese and loves the culture and her Japanese Heritage as well as my husband’s British London roots! I only look forward to being able to provide my Japanese Voice to people who are in need of a Veteran in the Industry as myself.

“What I love the most about the working as a Japanese voice actor is keeping up with the changing Japanese – English pronunciations. Languages are constantly changing and it challenges you to pronounce a trendy English word into Japanese correctly. And I happen to be a perfectionist when it comes to my work and I strive hard to provide what my client needs.”

Reiko is a true blue Seiyū (Japanese Voice Actor) but offers diversity in her reads – Corporate to Sultry to Animation voices. Reiko can bring your Japanese message to life in front of or behind the camera!