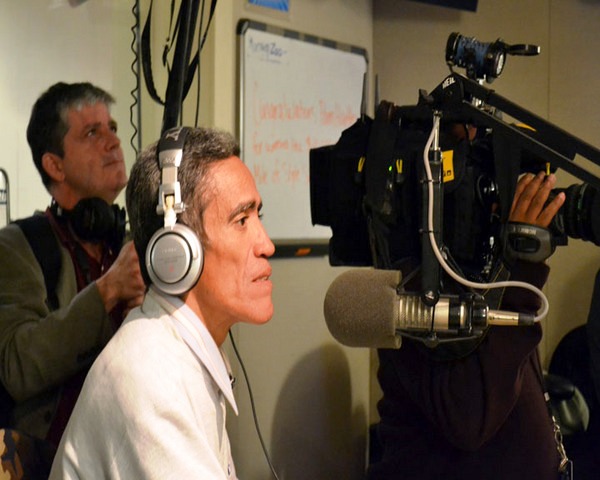 Ted Williams’ shot to fame started in 2011 after a reporter from Dispatch posted a video of him panhandling in a corner of I71 Hudson Street, holding up a sign that says, “I have a God-given gift of voice. I am an ex-radio announcer who has fallen on hard times.  Please, any help will be gratefully appreciated.”  He talked about how he discovered his love for announcing, the drug and alcohol abuse and his wish that someday he will get that break in the voice over industry.  Sure enough, after the video went viral, Williams was seen and heard all over television and radio for interviews, and has since then became the voice of Kraft.

In an update interview done by the same reporter, Doral Chenoweth, we learned that it has not been smooth sailing with Williams.  “I could have been a millionaire, “says Williams.  He hoping that he would be in a better position in terms of voiceover work after four years; however he feels that was taken from him.  Even after his contract with Kraft and a book deal that signed off $375,000 as an advance, Williams still finds himself broke.  With no home or furniture to speak of as his own, nor a car to drive himself to work, he regrets dealing with people who did not have his best interest at heart.

Despite having to face all these problems, Williams is still hopeful that along with his continued success in recovering from his addiction, he would get back on his feet financially once again.  He owes that strength in his belief that God is using his voice as a vehicle.  He has now found a higher purpose by using his voice to inspire others of his journey.  In an interview with James Minter of Midwest Voice Over Conference, where Williams was once a guest speaker, Minter spoke of how Williams made an impact to their participants, “Ted graciously gave us his time as part of his personal testimony to share his road to redemption, and that he felt lead to share his testimony of trials and tribulations to inspire those in attendance. “

Williams continue to get new voice work opportunities and with the help his new manager he is determined not to squander those opportunities away.  He has found comfort in the support given by his community and is driven to rise up against his past challenges.  Williams is equally inspired to do better by the homeless people he is serving today.

His fall from his top rated radio career in the 1980’s due to drug abuse, his 17 years of homelessness, the break that put him back in front of the microphone, his struggles in dealing with unscrupulous agents, and now his new found calling to be of service to others, is above and beyond a regular voiceover artist may experience in their lifetime.  Ted Williams’ life is a cautionary tale not just to voiceover actors… a tale that the industry is hopeful will end happily.