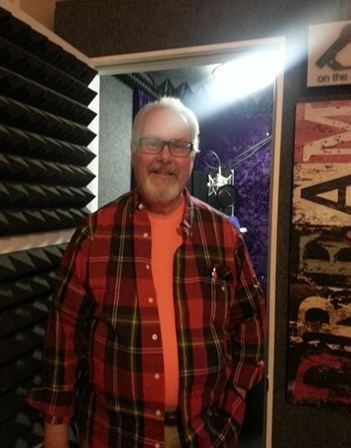 In one instance, Daniel even voiced a Mime for a radio commercial. That sounds interesting! Dorse explains.

[quote]As I recall, it was for a cable company that fairly early on was offering a service integrating telephone, cable, & high-speed internet.  The radio commercial began something like:  “Hi!  I’m a mime.  & while you can’t see me right now, I’m trapped inside this box…”  The character went on to describe how the service combined audio & video, & concluded with an announcer tag.  I came up with a quirky voice full of faux-theatrical wonder for the mime, the client loved it, & the rest is history.  The audio-animatronics (like the Lincoln figure at Disneyland) have ranged from Einstein  (for a children’s science museum), to Merlin the magician for the entrance to Excalibur Hotel/Casino, to a talking moose head & a talking bear head.[/quote]

How did you start out your career?

Back in the late 70’s, while doing dinner theatre in Buffalo, NY, the production company referred me for a call for voice actors for some radio commercials for one of the local TV newscasts.  A very few months later, back in Seattle, Washington still working on my Ph.D., I learned some actor friends were making a few bucks doing VO at a local studio.  So I contacted the studio, arranged to cut a demo using an array of copy I’d clipped from magazine & newspaper ads, & within a month was starting to book out of that studio, then started hustling my demo reel to every ad agency Creative Director in town.

What was the biggest mistake you made?

For 3 seasons I was the unseen, but often-heard announcer “MotorMouth Mike Morgan” for G.L.O.W.—Gorgeous Ladies of Wrestling, a syndicated show that surprisingly still has a fan-base.  It probably had the weirdest demographics of any show ever.  While eschewed by fans of “real” wrestling, it was avidly followed by a mixture of pre-teen girls & dirty old men.  At one point, with its Saturday noon-ish air time in New York City, I’m told G.L.O.W. actually got better ratings than the Olympics coverage airing at the same time.

Daring to quibble over what time zone I confirmed an audition in, when I was affiliated with a large national studio/production company.  Not knowing the new owner was a psycho (in my opinion) who would fire me for my temerity, I lost a situation where I’d made hundreds of thousands of dollars for both the studio & myself over a 10 year period.  On the other hand, while it was initially a bit of a blow financially, I did escape from under the thumb of the psycho, & am much happier doing my own thing.

What’s the best bit of advice you ever learnt and still use to this day?

Develop relationships with producers, engineers, & (in the case of audiobooks) authors, doing everything in your power to make their jobs easier.

Where do most of your voice over jobs come from?

What’s the biggest change you’ve see in the industry in the past year?

If someone had no idea about the voice over industry, what do you think would be the biggest eye opener if you explained to them what you do?

The wide variety of niches in the industry, & the complexities involved in quality audiobook narration.

What’s one thing you would love to change about the industry?

Pay rates that are higher & more consistent throughout the industry, & more quality control in the audition process.

What would be your one bit of advice to an industry newcomer? Let us know in the comment section below.