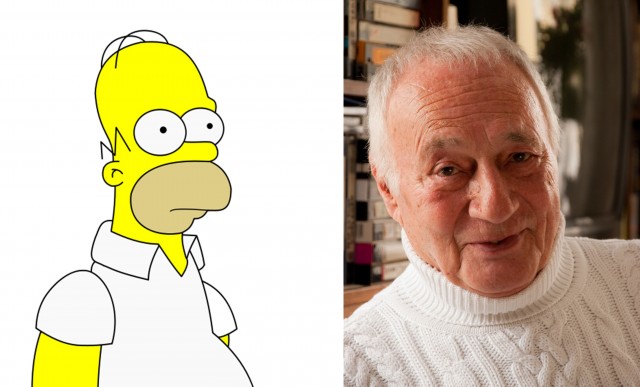 The Simpsons dysfunctional, yet loving family has been painting our lives in happy yellow for twenty-five years. Created by Matt Groening for Fox Broadcasting Company, the series is a satirical depiction of the American middle-class family and lifestyle.  Since its first episode on the 17th of December, 1959, it has broadcast over 560 episodes and is the longest-running American sitcom and American animated program.

The Simpsons is highly considered as one of the greatest television series of all time.  It has won numerous recognitions, including 31 Primetime Emmy Awards, 30 Annie Awards, and a Peabody Award.  It is shown in over 100 countries.

And some 4900 miles away… German voice actor, Norbert Gastell is rejoicing!  As The Simpsons celebrates their 25 years, Gastell who plays Homer Simpson in the German dubbed version of the series, announces that he has no intention of quitting any time soon.

Dan Castellaneta’s German counterpart is one of oldest working voice actors in the country.  The 85-year old Gastell has been working in the industry since 1952 but is best known for his voice role as Homer since the first time the series aired in Germany in 1991.  In a country where voiceover is a lucrative line of work because of their preference to dubbing as opposed to using subtitles, Gastell is considered one of the industry’s biggest stars.

Currently The Simpsons series in Germany is only on its 17th season, behind by 9 seasons from the American broadcast (the 26th season began on the 28th of September, this year).  This works perfectly well for Gastell who plans to continue working for the series.  This promises the Argentinian born actor more work in the future.  In an interview Gastell shared, “I’d have nothing to do, and that’s not for me.  We all get older, but if you do nothing you start to mentally decline.  But if you keep working… that keeps you young.”

Though Gastell has about five decades age advantage against what is estimated to be Homer’s age (who has not aged in the last 25 years), Gastell does the job in portraying the role of the donut loving, lazy nuclear-power plant worker (yet decent and fiercely devoted father).  Here is a clip of him and Sandra Schwittau, who plays Bart Simpson (this is in German of course).