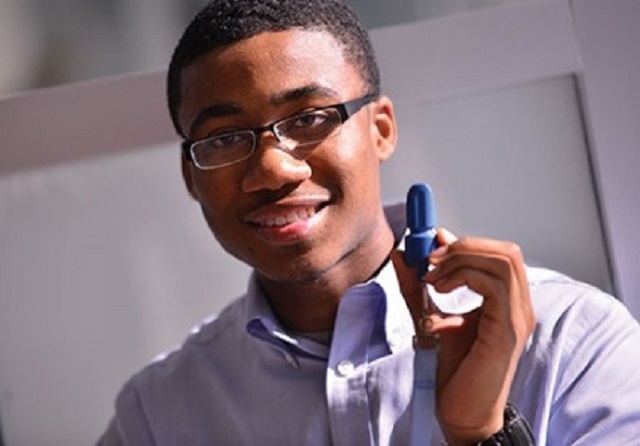 Marketing student Daniel Floyd was born with an articulation disorder and gone through speech therapy most of his life.  Even with the access to speech therapy, Daniel still looked for ways to help improve his speech.  He found it surprising though that availability of speech aid devices in the market were hard to come by.

During his junior year in high school, inspiration came to Daniel after watching The Great Debaters starring Denzel Washington.  In an interview with the Western Michigan University paper, Daniel explained, “Denzel had five debaters practicing for debate, and they were practicing with a radish in their mouths.  The radish forced the debaters to over enunciate their words and sounds, so once they took the radish out of their mouth, because of muscle memory, they would pronounce words as if the radish were still there.”

Then only 15-years old, Daniel used a wine cork in lieu of a radish.  He would bite on the cork while practicing speaking and noticed some improvement in his elocution.  While he practiced this way, he was training the muscles in his mouth and jaw to articulate words better.

He then began collecting wine corks from restaurants around his area.  Daniel reshaped them like a whistle to fit more naturally between his lower and upper front teeth and then named his invention SpeechMasterPro.   After several tests and encouraging feedback, Daniel, with the help of his parents, applied for patents for design and utility.  It is now currently manufactured by Accurate Products that produces several FDA approved silicone prototypes.

According to Daniel’s website, the device just needs to place in the mouth, between the teeth and practice speaking without touching the device with the lips.  The oral motor exercise helps strengthen the jaws and facial muscles which in turn strengthen the voice and projection.  With the tool, the speaker is helped in four key areas:

It started for Daniel as a personal quest for improvement and desire to help others with similar speech problems and as he explains, “It was just difficult for me to be understood in general, so when I was in middle school and in high school, it was really tough because of bullying.  The hardships I faced while being bullied are my motivation; helping others to get past their speech impediments is really fulfilling.” But it may prove to be useful as well for anyone who uses their voice to make a living – from professional speakers, singers, voiceover artists, and anyone who may need to communicate clearly, effectively and confidently.

What do you think?  Will this be a great tool to use for VO training?  Would you buy one for yourself to further improve your voice?