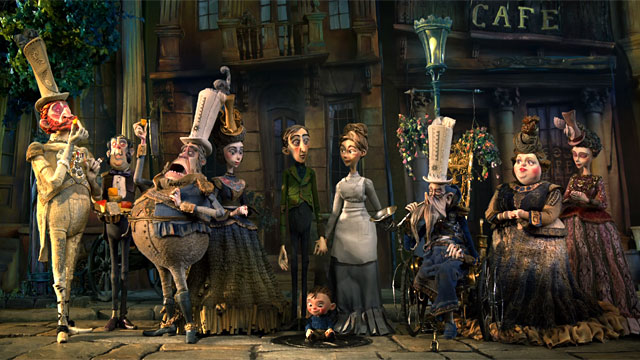 Fans of stop motion are in eager anticipation of upcoming film adaption of English writer/illustrator Alan Snow’s Here be Monsters.  The latest creation of top stop-motion studio Laika (Coraline, Para Norman), The Boxtrolls tells of the story of the orphaned boy named Eggs who was raised by cave-dwelling and trash collecting trolls called Boxtrolls.

Since the film’s premier at the Venice Film Festival last 31st of August, 2014 it has garnered mixed reviews, however, most critics would agree that there is something quite delicious with the Victorianesque setting and the experience of a dark carnival weirdness (though it is not very scary and grotesque that it would make the children run out screaming).  The animation is of course flawless (admittedly this is with bias as this writer is a huge Laika fan) and brilliantly voiced by seasoned and first –time voice actors.

The film is not short of voice-over star power headed by Ben Kingsley who has done numerous documentary and film narration; and has lent his voice in Freddie as F.R.O.7 and A.I. Artificial Intelligence.  In this film, he gave a dazzling performance as Archibald Snatcher.  The movie also stars Elle Fanning, who plays Winnie.  Elle has a couple of animation voice credits under her belt for the English adaptation of well loved Japanese films, My Neighbor Totoro and Astro Boy.  And fans of The Game of Thrones will also be treated to the voice lending of the show’s younger star, Isaac Hempstead-Wright.  Though his first voice-over work, Isaac gives an endearing performance as the lead role Eggs.  The movie also includes the more veteran voice actors for film and television,  Dee Bradley Baker (Teen Titan, Batman, Ben 10, Transformers – to name a few) and Steven Blum, made famous for his Japanese animation English adaptation roles and several Marvel television cartoon series.

The movie was adapted to the screen by Irena Brignull and directed by Graham Annabele (Coraline, Para Norma) and Anthony Stacchi (Antz and Open Season).  The Boxtrolls is another brilliant adaptation of a well-loved book through its fantastic animation and great voice acting.  This film will keep you laughing out loud till the credits roll.

The US premiere of The Boxtrolls is scheduled on the 26th of September, 2014.