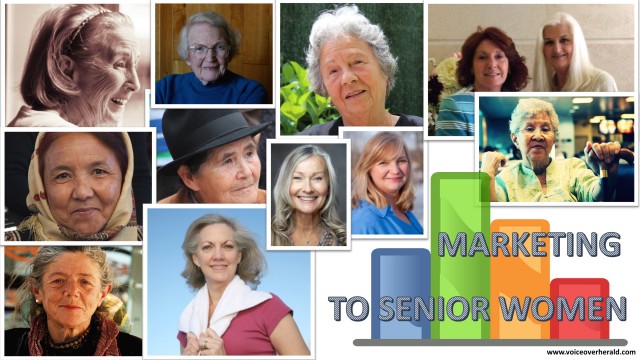 I was thrilled to see a commercial for a laundry detergent where a grandmother is watching her young grandson playing, dragging his ‘blankie’ in the dirt behind him. She is commenting on how dirty it gets and how this detergent not only gets it clean but doesn’t harm his sensitive skin. It speaks to other grandmothers; but to young mothers as well. Is it possible that advertisers are finally getting it? Or was this just a fluke?

Women 55+ are proving to be fertile ground for marketers, but marketers generally seem to be ignoring them.

Fifty-four years of age has been the highest cut-off point for any marketing initiative I’ve ever been involved in or even read about. Sometimes it’s as young as 49. Which is pretty weird when you consider age 50 is right about when people who have worked all their lives start to have some money to spend! – Marketing to PrimeTime Women by Marti Barletta

As a female voice actor with a mature sound, I find it fascinating that advertisers still seem to focus mainly on the younger demographic (especially younger males) despite the fact that the older demographic segment is increasing in numbers while the younger demographic is decreasing. One target market that is continually under-represented in advertising is women 55+. Why is that when all the statistics point to how important a segment they are?

Let’s take a quick look at some statistics:

Wealthy boomer women are the marquee players in our country’s culture and commerce. They are educated, have a high income, and make 95 percent of the purchase decisions for their households. – Karen Vogel, The Women’s Congress and co-founder and president of New Generation Event Solutions

Once the college bills are out of the way and children launch their own households, the discretionary spending power of 50-plus women soars. Research shows they spend 2.5 times what the average person spends. Women are the primary buyers for computers, cars, banking, financial services, and a lot of other big-ticket categories. – Franchising.com

Considering this, should this statistic not scream out to advertisers?

91% of women in one survey said that advertisers don’t understand them – She-conomy.com

More specifically to our topic, from Marketing to PrimeTime Women by Marti Barletta:

With more free time and disposable income, this segment remains a heavy consumer of many of the very same categories as younger segments. Specifically, she continues to care for her appearance, she prepare meals at home, she purchases gifts for her kids or grandkids, she buys vehicles, enjoys entertainment and travels. So why is her likeness dominantly associated with retirement, healthcare and aging? [my emphasis – ES] This woman is busy living!  – Jennifer Lomax, VP, Harbinger, Zooming in on the mature female consumer, strategyonline.ca

Again from Marti Barletta, author of Marketing to PrimeTime Women:

It’s time for marketers to reevaluate who is shopping in their brand categories, and explore the role of the zoomer as an influencer and decision-maker. This is not to say that all brands and categories should be chasing the mature woman, but (unintentionally) alienating this powerful female consumer group could be a very costly mistake.

And yet, if you look at specs for voice overs, you consistently see ages 20s, 30s (I particularly love the spec – mature voice, 30 years – especially since ‘mature’ has become the code word for the verboten ‘senior’). If you want to reach this lucrative market, use a voice with some experience, some gravitas and maturity that will actually speak to them. Stop with the 20 year olds touting anti-wrinkle cream. Stop consigning them to old age homes and tell them, in a voice they can believe, what they really want to know – what’s the latest in technology, automobiles, homes, etc. They still got a lotta living to do!

Elaine Singer, mature female voice, has 10 years experience. Her voice evokes maturity, warmth, authenticity and… quirkiness. Or, from Nurture to Nutty! She has gone from being that warm older woman grateful for her new hearing aids, to the spunky grandma telling it like it is, to the grocery store clerk rapping over the store PA system.

Marketing to Senior Women is the last in a series of three articles on the mature female voice.  The first two can be found on Elaine’s blog.