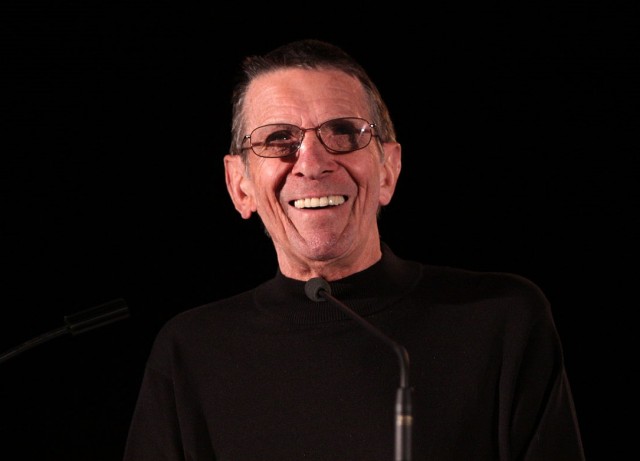 Leonard Nimoy’s name has become synonymous to Mr. Spock, the Vulcan first officer of the USS Enterprise in Star Trek, since he first played the role in the original Star Trek since back in 1966.  He gained so much prominence that he nearly eclipsed William Shatner who played Captain Kirk, the lead of the series.  After many years of playing the role in various series and movies, Mr. Spock was Nimoy and Nimoy was Mr. Spock.

Nimoy studied photography at the University of California, Los Angeles in the 1970’s after his stint with Star Trek and Mission Impossible. His work has been said to be controversial.  He produced several collections of provocative images on weight, sexuality, and religion. His work has been exhibited at the R. Michelson Galleries in Northampton, Massachusetts and the Massachusetts Museum of Contemporary Art.

Not many may know that Nimoy actually directed the 1987 movie Three Men and a Baby, but his directorial debut was back in 1973 with an episode from the final season of Night Gallery.  He also directed Star Trek III: The Search for Spock in 1984 and Star Trek IV: The Voyage Home in 1986.  He continued on being at the helm in the 1980’s, directing several television shows and movies.

He was also an acclaimed stage actor.  He played the role of Tevye in Fiddler on the Roof in 1971.  He also did the role of Randle McMurphy in One Flew Over the Cuckoo’s Nest in 1974 before Jack Nicholson played the same role in the movie version. He also toured with the Royal Shakespeare Company‘s playing the title role in Sherlock Holmes. He toured all over the States playing important roles in such plays like Camelot, The King and I, Caligula, and My Fair Lady.

He wrote two volumes of autobiography, the first was called I Am Not Spock released in 1975.  It touched on a self-proclaimed “identity crisis” that seemed to haunt him throughout his career.  The second volume I Am Spock published twenty years, reconciled Nimoy with the fact that in some sense he has merged with Spock but still maintaining distance between what is real and fiction.  He also published volumes of his poetry, one was entitled A Lifetime of Love: Poems on the Passages of Life.

Would you believe he too was a singer? He did songs where he sings as Spock in his albums Mr. Spock’s Music from Outer Space and Two Sides of Leonard Nimoy. In his last three albums with Dot Records, Nimoy did some cover songs of popular folk songs of his time, and also co-wrote some songs in the later album.

Nimoy did several voiceover work from the mid-90’s and onwards.  He first lent his voice to the documentary film Destiny in Space, an IMAX documentary in 1994.  He set up an audio-production venture that specializes in audio dramatizations together with another Star Trek actor John de Lancie.  Their company Alien Voices did several television specials for the Sci-Fi Channel, with the two actors narrating for The Time Machine, Journey to the Center of the Earth, The Lost World, The Invisible Man and The First Men in the Moon.  Nimoy voiced roles in animation –  Atlantean King Kashekim Nedakh in the Disney animated feature Atlantis: The Lost Empire in 2001 and in the television-based movie Land of the Lost. He also did several video game voiceover work starting with the English version of Seaman for Sega Dreamcast, Civilization IV, Star Trek Online and as the leading villain in Kingdom Hearts Birth by Sleep.

His branching out to some other form of art may still involve Mr. Spock, but Nimoy has proven that he is much more than the half human, half Vulcan “cultural Icon”. He was a multi-faceted artist who has left us with so much legacy.  We grieve the passing of another legend but we celebrate his life… with this Leonard NImoy will forever LIVE LONG AND PROSPER!