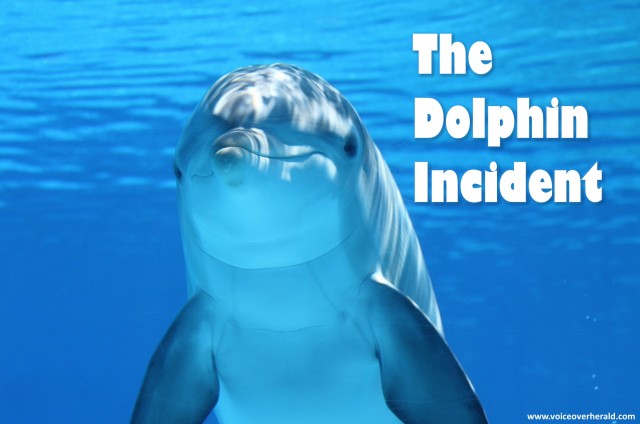 In the earlier part of my working life, I worked as a sound mixer for an amusement park. One of the jobs I did was to mix sound for a live Dolphin and Sea Lion show. When you’re tired of walking around a hot amusement park all day, learning about dolphins and sea lions as they splash around in a big pool is pretty enjoyable. As a result, the 4pm afternoon show was always a full house.

The head trainer and host of the show and I had a solid professional friendship. We’d worked together for years and I’d go so far as to say it was a friendship, but really it came down to the fact that she liked me because I cared about her show and always delivered my best.

One day in the middle of a show, the Host’s wireless microphone let out a loud POP that made people in the audience visibly jump. My engineering experience immediately deduced that this was the sound of a dirty connector in the transmitter she wore. I’d heard this before. This was a salt water pool and even with waterproof body packs, you’re always fighting salt from finding its way in to delicate electronics. After the show, I looked at the bodypack, fiddled with the connection and declared that it should be fine for the next show. The host asked, “Shouldn’t we replace it?” but I was confident that my expert audio engineering fidgeting was sufficient enough to fix the problem. I’m a professional. I know what I’m doing.

You can probably tell where this is going, right?

Sure enough, during the next show, (the 4pm show), while the host was in the middle of the big dolphin presentation, the mic abruptly cut out completely and for good: Dead. Nothing. The show had just come to a complete and silent halt – water lapping at the sides of the pool was the only sound in a theater filled with people.

The host looked up at me in the sound booth and shot me a look that said it all.

I immediately sprang into action. I bolted down the stairs, ran up on stage and attempted to deploy our backup “hard line” microphone. As I walked past the host, she said with a smile, “We’re going to talk about this after the show.” I sheepishly replied, “Yeah, I know.” as I grabbed the backup mic cable hidden on the stage. I swear it felt like the dolphins were laughing at me. (Little rubbery prima donnas.)

Now, theater guys will know that there’s a special way that mic cables are coiled so that when you hold both ends and throw it out, the cable splays out in one smooth line. They’re coiled this way specifically for situations just like this.

However, someone had coiled this cable backwards.

When I held both ends and tossed out the line, like magic, an overhand knot appeared every 18 inches down the length of the cable. It’s fair to say at this point that while my outward appearance was that of a skilled professional working to fix a problem, on the inside I was pretty-much losing my mind. I plugged in the mic, handed this tangled mess to the host and bolted back to my sound booth.

We got through the rest of the show, though definitely not at the level of quality we had hoped to entertain people with. After the house had been cleared, I walked backstage and prepared for the barrage. The host – to her unbelievable credit – casually walked up to me, handed me the busted microphone, paused for a second and said. “Well….so that happened,” then turned and walked away.

I learned a valuable lesson that day: don’t believe your own bull****.

The minute you do, Murphy’s Law steps up and says “let me play you the song of my people.”