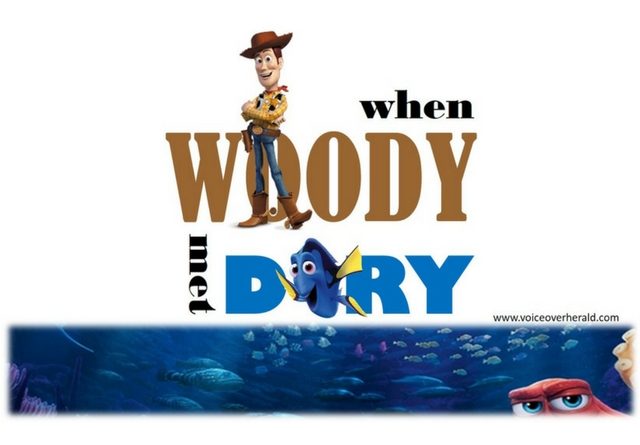 Isn’t it every child’s dream to have all their favourite characters in one movie or show?

Well thanks to Tom Hanks, the voice of Woody in the Pixar hit Toy Story, Ellen DeGeneres’ audience was given a treat – a voice over off with Woody and Dory.

It all started with Tom Hanks asking Ellen if she was ever been pointed out as her character only to be met with blank looks from kids who see no resemblance at all to their cartoon counterparts. His solution to this problem was to make the kids close their eyes and speak like his character. He then suggested to have a Pixar-off, asking the audience to close their eyes… then the magic happens – When Woody Met Dory!

It was a delightful sequence, hearing two of the most beloved characters in Pixar (and most probably the whole animation world) in one scene. The audience just ate it all up!

While some people may think voice acting is easy-peasy, professional voice over talents would attest that it can be grueling work. You don’t just rely on your voice, the physical aspect of a character is as important.

Tom and Ellen swapped stories as well about voice acting. The talk show host shared, “It’s harder work than people think it is, because it is all emoting. Just your voice is doing all the acting. It doesn’t seemed like hard work, but it is.”

“Woody is clenched all the time. My diaphragm is always exhausted after those four-hour, five-hour recording sessions,” Tom said.

They also shared how much time they have to spend on recording the same queue over and over.

Yes, take it from the two Pixar voice over superstars, voice over acting means hard work. And if that isn’t enough, let us also quote Andy Serkis, a premier performance capture and voice over actor, “You have to get your body into it as you can hear all that… (Voice acting) is the same as any acting experience, you are embodying a character; you are climbing inside the role and losing yourself in that role.” How profound!

Well back to Woody and Dory… after this brilliant idea from Tom, will we ever see a Toy Story and Finding Dory cross-over? Well, in the animation world (and definitely in the Pixar universe) anything is possible.